The Brooklyn Nets showed us one thing Sunday night: They are not in the same league as the Boston Celtics, the team that swept them out of the playoffs last season. OK, technically they are in the same league. But you get the picture.

Yes, statement games in the NBA can happen in early December. And when the Celtics came into Brooklyn last night and took control from the get-go — and without having their best defensive player, Marcus Smart — they sent a message to the Nets and everyone else in the East that they are the class of the conference until proven otherwise. Which cannot happen until Christmas Day at the earliest, when they meet the Milwaukee Bucks for the first time.

If you are holding a ticket on Kevin Durant for MVP, we do not suggest you rip it up. But consider it a loser that you will not be cashing in late June. That’s when the team from Kings County will be well into its summertime break, if this abomination was any indication.

Players with multiple 30/10 games with 5 threes this season:

Note the sarcasm from KD.

We get where he is coming from. But the Celtics came up with an easy solution to prevent KD from defeating them. Every time he touched the ball in the fourth quarter, he was double-teamed. Did Kyrie Irving step up? Did Seth Curry? Did Joe Harris? No, no, and no. It was like they were all channeling Giants coach Brian Daboll (playing for a tie) and Jets quarterback Mike White (57 passes, and not one of them went for a TD.)

The only New York metropolitan area team that had something go right for them was the Knicks, and that was a hollow victory they had over a Cavs team playing without Jarrett Allen. It was the ‘Bockers first home victory since Nov. 11, and it was of small solace to sports fans in the metropolitan area who let these kinds of things impact their personal and professional lives. Words of advice: Be careful in the stock market the next couple of days, because it will be raining in Gotham, and Wall Street types are moody. They are down on the Jets, down on the Giants, down on the Nets, and bracing for Aaron Judge’s departure. They have jobs they need to hold, and with the Dow starting the week in the 34,000 range, their clients may want to escape before it freefalls into the high 20s, as it did in late September.

The Future (and Futures Markets) For Nets

Brooklyn is in the midst of a seven-game homestand, its longest in more than a decade. After all of the dramatics involving Irving and former coach Steve Nash earlier this season, this was supposed to be a time for them to string together a series of victories to show that they are in the same class as the Celtics and Bucks.

Comfortable victories over the Blazers, Magic, Wizards, and Raptors seemed to have the Nets heading that way. But not one of those opponents even scratches the surface of the league’s elite. The next true measuring stick game for the Nets will come during a three-game stretch late this month. That’s when they play the Warriors at home on Dec. 21, then the Bucks at home Dec. 23, and the Cavs on the road on Dec. 26. They will not see the Celtics again until traveling to Boston on Jan. 12, and they currently sit in fourth place in the Atlantic Division, also trailing the 76ers and Raptors.

Brooklyn is +2000 at Draft Kings to win the Atlantic, but also just +2500 to be the No. 1 seed in the East and +1200 to win the championship. So they are still getting respect from the books, as evidenced by the championship odds of the league’s other 13-win teams. Atlanta and Portland are +5000; Golden State is +700; the L.A. Clippers are +800, and the Sacramento Kings are +10000. If sports gambling was already legal in Massachusetts (it is coming, but state authorities are dragging their heels), this chart of where the money is going would look different: 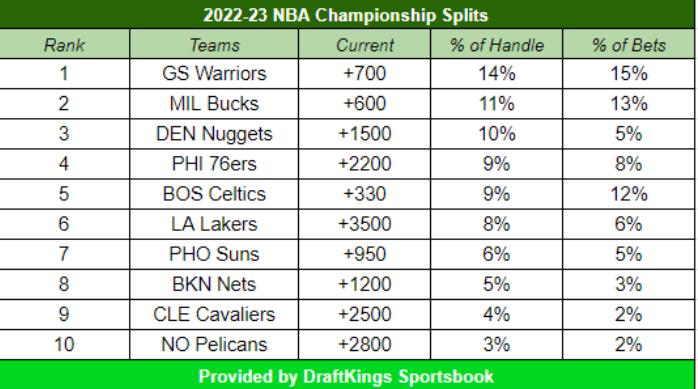 Which goes to show you how meaningless, in the big picture, the NBA’s regular season has become in the age of the play-in tournament. That knocks only 10 of the league’s 30 teams out of the championship picture when the regular season ends. Between that and the league’s newfound emphasis on calling palming and traveling violations, it’s not the same game. It makes you want to wager on who in the league office will have the guts to tell commissioner Adam Silver that competitiveness has taken a backseat to coasting, and something needs to be done. (Best bet: Nobody tells him. Silver is surrounded by “Yes men.”)

Remember when the NBA was FAN-tastic? Not feeling that way now, unless you were one of the fortunate few who wagered money on Anthony Davis for MVP at +25000 last Friday. His 55-point performance for the Lakers last night made several sportsbooks take down their MVP futures markets. This afternoon, he was on the board at +2400 at Fan Duel.

Durant’s MVP odds have risen to +4200 despite the fact that he is averaging career-highs in field goal percentage (.554), free throw percentage (92.1), and true shooting percentage (.665). Irving opened the year at +10000, but is now off the board (and just got diched by Nike), and Bet365.com (only available to New Yorkers who travel to a neighboring state) still had not reposted MVP odds as of Monday afternoon.

At BetMGM, 4.1% of tickets and 3.8% of handle have come in on the Nets to win the NBA championship, spokesman John Ewing said.

To put the Nets’ start in perspective, after 25 games they are 13-12.  Last season, the eventual champion Golden State Warriors were 21-4 after 25 games. But the Eastern Conference winners, the Celtics, were 13-12 and would go on to be 23-24 on Jan. 21 before closing the regular season with 28 wins in their final 35 games.

The Nets did not have Ben Simmons last night, as he was rested for a third straight game because of a strained calf. But the Celtics were without Smart, so that one is a wash. What was striking about the Nets was how they seemed to merely be going through the motions. That was difficult to watch to close a weekend that featured the ultra-competitive World Cup knockout round, along with one of the more entertaining batch of Sunday afternoon NFL games we have seen in a while.

At a certain point, the Nets should be better. But enduring their bouts with blah is excruciating. And quite frankly, we long for the days when there was a little more nasty in the NBA.

ICYMI – Kevin Durant told me the #Celtics have put the perfect team around Jayson Tatum to compliment his skills, leading to his 22-23 leap.

“He’s stepped into a leadership role, just building his confidence every year.”

The 92 points were the worst offensive output for the Nets all season, and the best defensive effort for the Celtics, who defeated Brooklyn for the eighth consecutive time. For now, Brooklyn does not look like a good championship bet.

But remember, it’s early. The Celtics were 13-12 after 25 games last season, yet they played into late June. So do with that information what you wish, and let’s all agree that a little more likeability would go a long way for this Nets team, who could at least pretend they care.