Kentucky Derby 148: Plenty of Questions to be Answered Saturday

Saturday’s Kentucky Derby will be hard-pressed to top the scene at Churchill Downs on Friday, where 86-year-old hall of fame trainer D. Wayne Lukas won his first Kentucky Oaks in 32 years with Secret Oath. Still, the 148th running of Run for the Roses will offer several captivating storylines leading up to post time for the mile-and-a-quarter race.

Unfortunately, Lukas’ chance for an Oaks-Derby double went by the wayside Friday morning when Ethereal Road was scratched, but that allowed Rich Strike to join the race. Trained by Eric Reed, the Keen Ice progeny earned his way in by virtue of a third-place finish in the Jeff Ruby Steaks last month at Turfway Park.

Should Rich Strike pull the mother of all upsets, it would give Reed, who started training horses in 1985, just his second win in a graded stakes race. His only win came back in 2009 when, according to Equibase records, Satans Quick Chick won the Lexus Raven Run Stakes at Keeneland.

Reed put in a $30,000 claim Rich Strike last September after the colt broke its maiden with a 17-1/4-length win at Churchill Downs. Since then, he’s mustered three third-place finishes in five races.

As an also-eligible entry, Rich Strike will break from the far outside gate in the field of 20. That just so happened to be Ethereal Road’s gate as well. On Friday, he explained what would be the best-case scenario for his horse, whose parimutuel odds were 99-1 on Saturday morning.

“Get a good break and work over to the inside,” Reed said. “Start picking them up midway on the backstretch and then pass them all before the finish line.”

Here’s a look at some of the storylines for Kentucky Derby 148, which is set to run at 6:57 pm ET. NBC will broadcast the race.

Who Will Be The Favorite?

There’s not really a 3-year-old in this year’s Kentucky Derby that stands out above the rest, and through the early wagering on Saturday, bettors were feeling the same way.

Epicenter started the morning as the betting favorite at 5-1. Santa Anita winner Taiba was also at 5-1, but more money was put on the Louisiana Derby winner. Messier, who finished behind Taiba at Santa Anita, was at 7-1 – the same odds as Blue Grass Stakes winner Zandon. Wood Memorial winner Mo Donegal is just behind at 8-1.

All those horses have questions surrounding them: Can Mo Donegal win despite starting on the rail? Can Epicenter give trainer Steve Asmussen his first Kentucky Derby win? Does Taiba, who is bidding to become the first horse in nearly 140 years to win the Derby in just his third race, have enough racing experience to win – especially if he has to come from the pack? Can Messier handle the extra distance? Did Zandon really figure it out in the Blue Grass Stakes?

Who Will Mattress Mack Back?

Just like last year, Jim “Mattress Mack” McIngvale will be at Churchill Downs to bet on the Derby. Like his wagers in other sports, it’s tied to a promotional sale at his Gallery Furniture stores in Houston, but this promo isn’t as cut and dried as the others.

The promotion focuses on the favorite to win. If that happens, Gallery Furniture customers who spent at least $3,000 on select furniture or mattresses get their purchase for free.

Mattress Mack made a similar bet last year, but it was fairly certain Essential Quality would be the Derby favorite. As I mentioned above, this year isn’t as clear, and while Mack’s millions will definitely tip the scales, he might have to spread it out to cover some of his liability.

McIngvale also plans to bet a little on Smile Happy, who was sired by the businessman’s champion sprinter Runhappy.

Who Else Could Win The Kentucky Derby?

Besides those five, there’s another tier of Derby horses that could pull out the win and give their bettors a handsome return.

Smile Happy looked good in the Blue Grass until Zandon chased him down on the stretch.

When I turned for home, I didn’t think anybody could beat him,” Smile Happy jockey Corey Lanerie said after the Keeneland race last month. “He went so easy through the half-mile and the fractions were nice. He had his ears up and he was happy. I called on him and he kept going. The other horse was just better than us today.”

He also finished second to Epicenter in the Risen Star back in February but did so coming from back in the pack while mounting a late charge in the 1-1/8th-mile race.

Crown Pride comes from Japan and qualified for the Kentucky Derby by virtue of his win on March 26 in the UAE Derby. He’s won three of his four starts, and his only loss came on an off track.

White Abarrio has four wins in five starts, including last month’s Florida Derby. Cyberknife is 2-for-2 this year and comes to Louisville after winning the Arkansas Derby last month. Both also will break outside, from the 15th and 16th gates respectively.

“Cyberknife is a quick gate horse, so he should he fine,” trainer Brad Cox said. “He has one speed horse to his outside (Classic Causeway) and that should help him.”

The parimutel odds as of Saturday morning on those horses range from 12-1 for White Abarrio to 18-1 for Crown Pride. 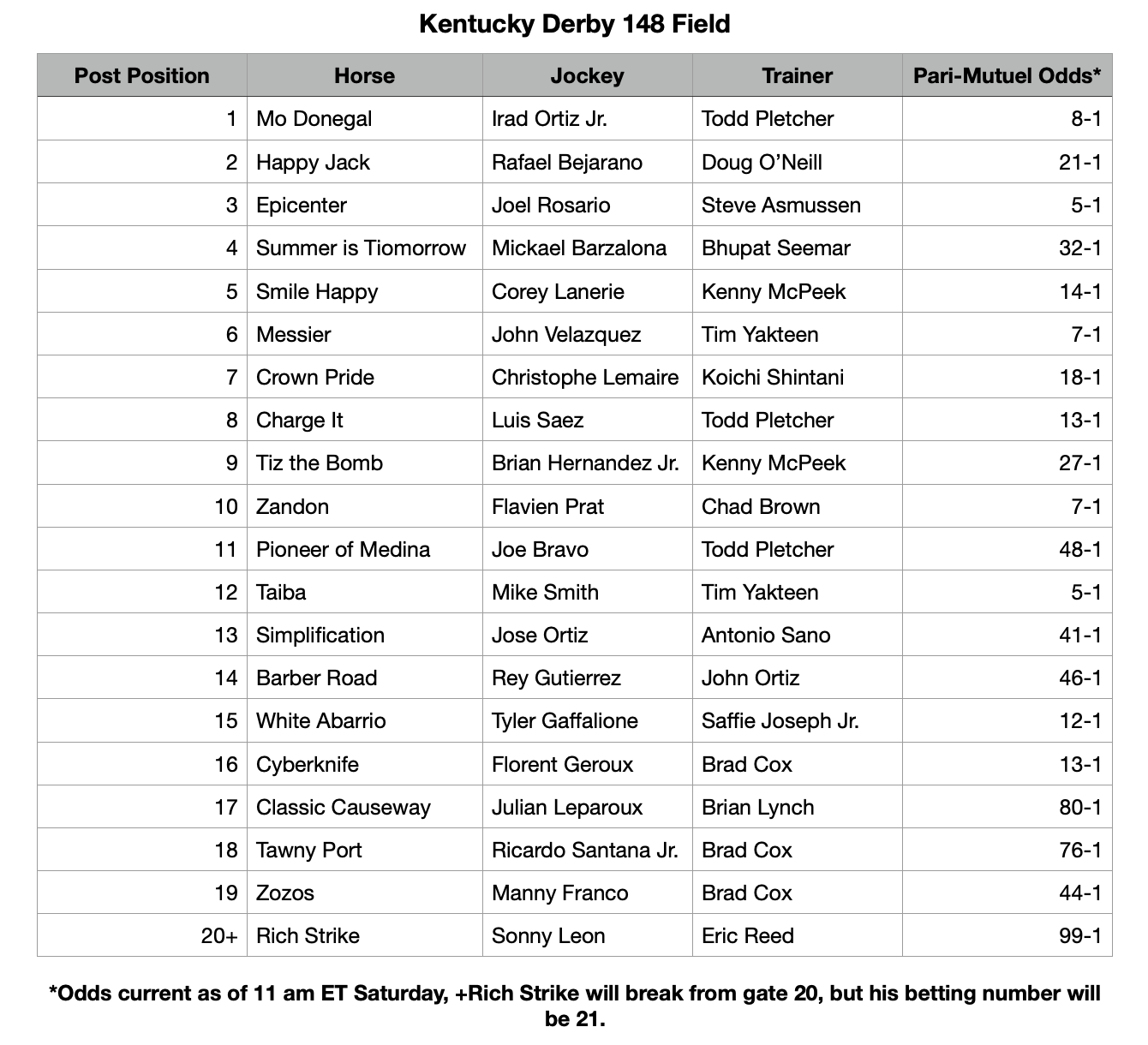 Does Baffert Still Have A Presence?

While Bob Baffert is not at the Derby this year due to the two-year suspension Churchill Downs handed down after Medina Spirit tested positive for excessive amounts of betamethasone in his system, the legendary trainer still will have a tie-in with the race.

Baffert initially trained Messier and Taiba. However, under Churchill Downs’ suspension, no horse trained by him could earn qualification points in prep races. So earlier this year, a few of Baffert’s top prospects were switched over to Tim Yakteen, a former Baffert assistant.

Besides the Churchill Downs ban, Baffert also is serving a 90-day suspension handed down by Kentucky Horse Racing Commission stewards because of Medina Spirit’s failed drug test. Due to reciprocity agreements with other racing commissions, that means Baffert cannot field horses in any state and will miss out on the other Triple Crown races. He is fighting both the KHRC and Churchill Downs suspensions.

Should Taiba win, it could make for quite the scene in the Churchill Downs winner’s circle. Taiba is owned by Zedan Stables, which also owned the late Medina Spirit.

The questions won’t stop once the Derby starts. For Saturday’s winner, they’ll likely head to Baltimore for the Preakness Stakes and the second jewel in the Triple Crown. Whoever wins will not face nearly the crowd of horses they had to overcome in the Derby.

But they may have to face Secret Oath. Lukas ran her in the Arkansas Derby last month, and she finished a respectable third.

On Friday, after the Oaks, Lukas said either the Preakness or the Black-Eyed Susan could be the next race for Secret Oath.

“When you got a talented horse, you need to look at everything, try to develop their career and get them to a championship level,” Lukas said.

The post Kentucky Derby 148: Plenty of Questions to be Answered Saturday appeared first on Casino.org.

Source: Kentucky Derby 148: Plenty of Questions to be Answered Saturday

The short URL of the present article is: https://pokerone.info/RJIZj