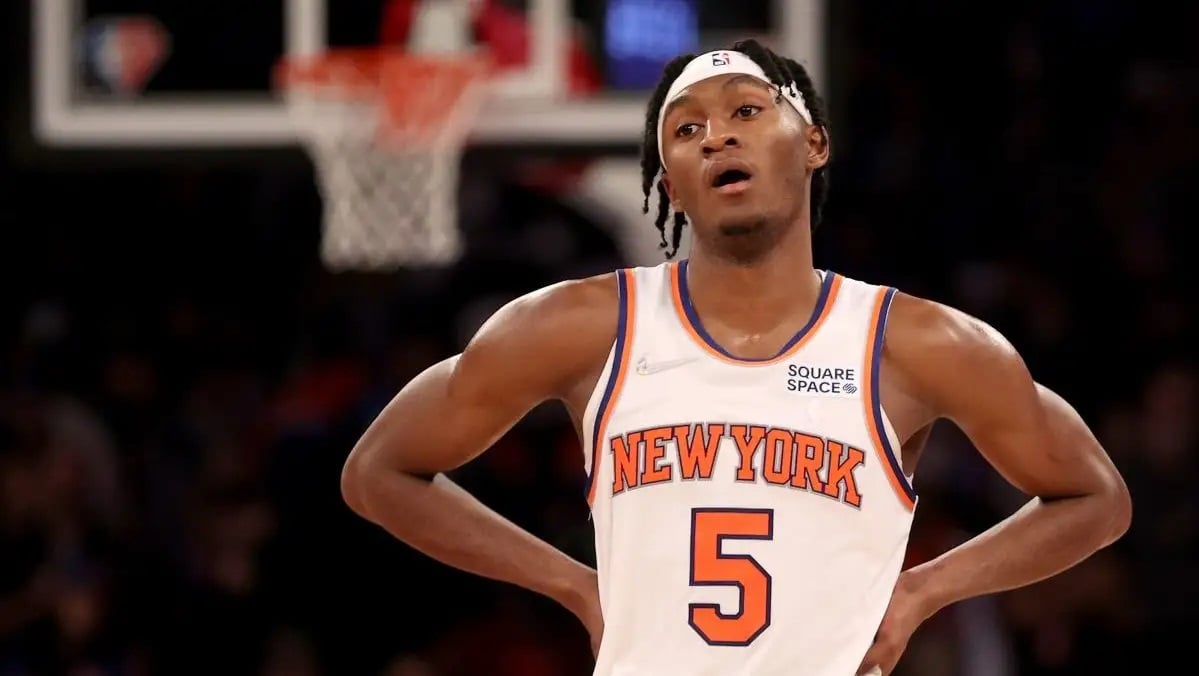 The Chicago Bulls recently shot down rumors that they wanted to trade Zach LaVine to the Knicks. LaVine is off limits according to the Bulls, but they’re open to trading forward DeMar DeRozan and/or center Nikola Vucevic.

The streaky Knicks won three games in a row to improve to 13-13 on the season. They moved into eighth place in the Eastern Conference playoff standings, but tied for last place in the Atlantic Division.

Whenever the Knicks lose a couple games in a row, the boo birds at Madison Square Garden have been calling for the Knicks to fire head coach Tom Thibodeau. Any time the Knicks win a couple game in a row, like their current three-game win streak, Thibodeau can breathe a momentary sigh of relief knowing his job is safe… this week.

The Knicks are on shaky ground, and the team could shed numerous players by the trade deadline on Feb. 9. And, who knows if Thibodeau will even be coaching the Knicks in two weeks, let alone months.

Quickley is the Knicks’ fourth-best scorer averaging 10.0 points, 4.3 rebounds, and 3.0 assists per game off the bench as their sixth man.

Quickley started at Kentucky as one of John Calipari’s one-and-done five-star recruits. The Knicks had whiffed on another Kentucky player when Kevin Knox never panned out when the Knicks failed to develop the forward. However, Quickley made an instant impact and earned a spot in Thibodeau’s hard-to-crack rotation due to his defensive tenacity and his ability to draw fouls.

Kvetching Knicks fans thought that Quickley should’ve been starting last season instead of a slumping Evan Fournier or a banged-up Kemba Walker. However, Thibodeau wanted Quickley to come off the bench as the leader of the second unit. Whenever Quickley stepped on the court, he provided the team with an immediate boost of energy and offense. He’s the main reason the second unit outplayed the starting five most of last season.

Quickley’s days with the Knicks were numbered after they signed point guard Jalen Brunson to a lucrative contract in the offseason. As much as fans want the Knicks to keep Quickley, he’s their most coveted asset on the trade market.

I love being in New York,” Quickley told reporters when asked about trade rumors.

The Knicks acquired Reddish from the Atlanta Hawks last season at the trade deadline for a first-round pick. The transaction baffled Thibodeau because he was not consulted on the trade, and there was not a spot in the rotation for Reddish. Reddish did not play much last season averaging only 6.1 ppg in 15 games with the Knicks.

Reddish began this season as one of Thibodeau’s rotational players averaging 8.4 ppg. In the last week, Thibodeau benched Reddish, much to his surprise, because his head coach never really explained his demotion.

The Hawks selected Reddish with the #10 pick in the 2019 NBA Draft. He started 34 games as a rookie, but came off the bench in his next two injury-riddled seasons. He could get traded in back-to-back seasons.

For a hot minute, the addition of Reddish suggested the Knicks were adding another Duke player to the roster to entice Zion Williamson to join the team. Williamson played a one-and-done season at Duke, where RJ Barret and Reddish were his teammates and two best friends during college. Both are currently on the Knicks, and Williamson was not shy about his love of MSG and his desire to one day play for the Knicks.

Williamson signed an incentive-heavy contract extension with the New Orleans Pelicans in the offseason, but that doesn’t mean he couldn’t force a trade to the Knicks. Then again, the Pelicans are one of the best teams in the Western Conference right now with a healthy Williamson playing the best ball of his young career.

Fred Katz from The Athletic reported that the Knicks want to package Reddish as a sweetener for any trade involving Evan Fournier.

The Knicks signed 3-point specialist Fournier before the start of last season, along with Kemba Walker to boost their backcourt. Both moves ended up being a bust. The streaky Fournier had his moments, but he was not usually on the court at the end of the game despite being a starter. Thibodeau didn’t trust him in crunch time.

Fournier had a stellar EuroBasket 2022 tournament playing for his home country of France. He led France to a silver medal, and looked like he regained some confidence that he lost while playing with the Knicks last season.

Fournier looked sharp during the preseason, but his season unraveled after seven games. Thibodeau demoted Fournier to the second unit, which only lasted six games before he was demoted again. For now, Fournier finds himself in Thibodeau’s dog house and not playing at all while buried at the end of the bench. That’s a costly move considering Fournier earns $18 million this season, and next season.

Fournier has been linked in trade rumors with the Los Angeles Lakers, who are desperate for outside shooters. The Knicks do not want to add a first-round pick to entice teams to take Fournier off their hands.

Fournier averaged double digits in scoring in the previous nine seasons. Just a couple seasons ago, he averaged 19.7 points per game with the Orlando Magic. In 13 games this season, Fournier started in seven. He averages 6.9 points, 2.1 rebounds, and 1.7 assists per game. He’s also shooting a career-low 33% from 3-point range.

Derrick Rose is the Thibodeau whisperer on the Knicks. Rose played with Thibodeau during his previous head coaching stints with the Chicago Bulls and Minnesota Timberwolves. The old-school Thibodeau mellowed out in recent years, but his abrasive personality can be a little harsh for the younger and coddled Gen Z players. That’s where Rose comes in as a conduit between the young players and the coaching staff.

Rose is a former MVP, but multiple knee injuries slowed him down in recent years. He’s shown flashes of his old self at times, but the Knicks are loaded at point guard with Brunson and Quickley. Rose has demonstrated more value as a veteran voice in the locker room over the last couple of seasons.

Rose has been mentioned in trade rumors involving the Dallas Mavs, who could use a veteran point guard like Rose to come off the bench. The Atlanta Hawks and New Orleans Pelicans were also interested in acquiring Rose in a trade with the Knicks.